A Commentary on Vivekananda Text

Science and disciplined observation, according to Vivekananda, form the only valid basis for religious life.

Vivekananda criticizes most popular religious ideas to the extent that they are based on faith and belief alone, rather than direct personal experience. If ones religion is just what one has been taught by society to believe, he asks, how can it be validated? Human culture, after all, has often been mistaken about many things. Therefore, it is necessary to base religious ideas on a scientific method guided by experience, not mere belief (pp. 7-12).

Unlike most Western sciences, however, Raja Yoga is introspective, and it uses the mind itself as its primary instrument of research (p. 12).

To the extent that most religious people have based their faith on mere dogmas imbibed from their culture, and because their perspective on spiritual issues is skewed by their presuppositions, they often misinterpret the true nature of their experience.

Furthermore, most people make the mistake of being outward-directed, living under the sway of external objects. If they could learn to look within, they would find the answers to many of their religious questions and longings within their own spiritual nature. "The man who thinks that he is receiving a response to his prayers does not know that the fulfilment comes from his won nature, that he has succeeded, by the mental attitude of prayer, in waking up a bit of this infinite power which is coiled up within himself. Raja Yoga is the science of religion, the rationale of all worship, all prayers, forms, ceremonies, and miracles" (p. 58).

Vivekananda urges that we must put aside our superstitious beliefs and learn to observe the powers emanating from our own minds. The divine principles that appear to come from external agencies independent of us are indeed beyond us in a sense insofar as they come from beyond our conscious minds. But this kind of "beyond" is nevertheless located within the psyche itself (pp. 80-82). The goal of yoga is therefore to unlock the spiritual forces within ones own heart.

Symbolic language is the best way to understand much of Vivekananda meaning.

Because the method of Hinduism esoteric psychology is primarily introspective, it would be inappropriate to interpret the main categories and theories as if they were supposed to be literally, objectively true. Rather, their purpose is to evoke an experiential response within the mind of the meditator. Hence, they are "verified" in terms of their utility as subjective markers and meditation images.

For example, Vivekananda describes the Kundalini, which is central source of cosmic energy in the body, as "triangular in form." But he also specifically acknowledges that this description is expressed in terms of a "symbolical language" (p. 50).

The same applies to the descriptions of the seven "chakras" (psycho-spiritual centers), which are visualized as lying along the spine from the lower abdomen to the top of the head (p. 63).

Also primarily symbolic are the images and ideas associated with the Ida, the Pingala, and the Sushumna: those vertical channels that run through the spine (pp. 50-56, 62-63).

The same applies to the brilliant representations of blazing lotus flowers, each of whose petals holds a special meaning; or the evocative image of a flame that yogis seek to visualize in the center of the heart (p. 91).

None of these ideas should be understood exclusively, or even primarily, in literal terms. Again, their utility lies in their intuitive implications for meditation practice.

Nevertheless, a criticism could be made that Vivekananda himself, and others in his esoteric tradition, may not always be sufficiently aware of this distinction between literal and symbolic truth. (But couldnï¿½t the same criticism apply equally well to many familiar Western theories and ideas as well?)

Distinctions among the conscious, the unconscious, and the superconscious mind

Vivekananda distinguishes among three levels of the mind or psyche:

(1) the unconscious mind, which consists of one instinctive urges and desires;

(2) the conscious mind, which is self-aware but still driven by selfishness, ambition, and greed; and

(3) the superconscious mind, which comes from the highest source of spiritual reality, namely the supreme Brahman-Atman or Purusha (pp. 38, 76, 80).

The Eight Stages of Raja Yoga

There are eight most important components involved in the practice of Raja Yoga (pp. 22 ff.; also 87 ff.).

Yama: the vows of abstention, including non-killing of sentient beings, refraining from lying, refraining from stealing, moderating ones physical desires, and refusing to accept gifts (pp. 22, 87).

Niyama: the positive precepts, whereby one keeps oneself clean both physically and mentally, has a contented and cheerful attitude, develops good habits in one study of yoga, and devotes oneself wholly to God (pp. 22, 88-89).

Asana: the discipline of good posture when meditating, holding the back erect and keeping the chest, neck, and head in a straight line (pp. 22-24).

Pranayama: the control of the prana energy, which according to Hindu philosophy connects the individual with the rest of the universe. The starting point of pranayama is breath control, but it involves also the heartbeat and the flow of all one psycho-spiritual energies (pp. 34 ff.).

Pratyahara: the internalization of perception (literally it means a "gathering toward," p. 68), whereby one detaches the mind from the externality of objects and experiences them rather as functions of ones own awareness. In other words, one still perceives objects, but no longer thinks of them as "out there," separate from oneself.

Dharana: forcibly holding the attention fixed on a single object of experience, to the exclusion of any others (p. 70). Since one has already mastered pratyahara at this stage, however, the one-pointedness is not outwardly but inwardly directed, usually toward one of the chakras (p. 90). In so doing, one is really focusing on the mind itself as it keeps hold of a fixed center of awareness.

Dhyana: that is, total concentration, conferring such mastery of the thought-waves that one can direct them in an unbroken current toward any object, external or internal (p. 83). In effect, one has learned how to enter the trance state at will.

Samadhi: the supreme bliss of enlightenment, in which the mind achieves a superconscious state (p. 77) of objectless contemplation (pp. 55, 85). This is the ultimate goal of all religion, according to Vivekananda.

Following Patanjali, Vivekananda describes seven spiritual energy- centers, or "chakras," located at various points at the back of the body cavity and arranged along the spinal column (p. 63). The following list should be read upward, starting at the bottom:

Sahasrara, at the crown of the head, with a thousand petals;

Aja, between or just above the eyebrows, with two petals;

Vishuddha, in the region of the throat, with sixteen petals;

Anahata, near the heart, with twelve petals;

Manipura, near the solar plexus, with ten petals;

Svadhisthana, usually visualized as just above the genitals, with six petals;

Muladhara, located in the sacrococcygeal plexus at the base of the spinal cord, close to the genitals and anus, visualized as a lotus flower with four petals.

The two most important chakras for meditation purposes are the starting and ending points the Muladhara and the Sahasrara (see the illustration on p. 52).

In the Muladhara, coiled up in a triangular area, is the serpent-like Kundalini, which contains the individuals reservoir of psychic energy. The goal of Raja Yoga is to awaken the Kundalini and send it upward along the chakras until it reaches the Sahasrara and opens the thousand-petaled lotus blossom there.

Vivekananda indicates in several passages that the mastery of yoga confers truly amazing psychic powers. One can:

The Sushumna as the gateway to spiritual discipline

According to the teachings of Raja Yoga, there are three major pathways of physical and mental energy that travel along the spinal cord (see the cross-sectional diagram, below).

The first two, called the Ida (on the bodyï¿½s left side) and the Pingala (right side), direct the physical sensations from all parts of the body to the brain, and carry back commands from the brain to the various muscles and organs of the body.

Vivekananda takes pride in the fact that this ancient doctrine closely corresponds to the discoveries of modern physiology (p. 53).

The most important channel, however, is not a nerve bundle at all but a hollow channel within the very center of the spinal cord. It is called the "Sushumna," or in modern Western terminology the "central canal," through which the cerebro-spinal fluid flows.

Raja Yoga teaches that the spiritual energy of the prana travels along the Sushumna and is able to achieve greater purity and subtlety of perception precisely because this channel is free of nervous tissue. Vivekananda suggests that, if the nerves are the body electrical wires, so to speak, the Sushumna is like the channel for radio transmission (p. 56).

Through the practice of yoga, the Kundalini moves up through the Sushumna through the various chakras, until it reaches the Sahasrara chakra (pp. 55-57).

According to Vivekananda, "To open the Sushumna is the prime object of the yogi" (p. 63). 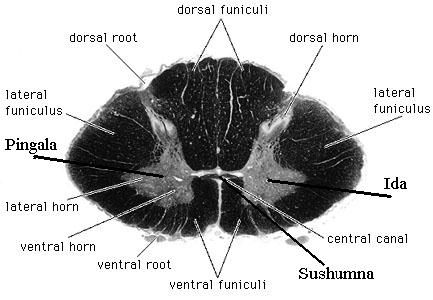